I’m going to stop promising which will be the last scene I post today. This one was mine:

TARKIN: There. You see Lord Vader, she can be reasonable. (addressing Motti) Continue with the operation. You may fire when ready.

TARKIN: You’re far too trusting. Dantooine is too remote to make an effective demonstration. But don’t worry. We will deal with your Rebel friends soon enough.

[A button is pressed which switches on a panel of lights. A hooded Imperial soldier reaches overhead and pulls a lever. Another lever is pulled. Vader reaches for still another lever and a bank of lights on a panel and wall light up.]

Okay, I lied, one more episode, this one written by James:

The Ewok jumps up and grabs a four-foot-long spear, which he holds in a defensive position. Leia watches him as he circles warily and begins poking her with the sharp point of the spear.

LEIA: Cut it out!

[She stands up, and the Ewok quickly backs away.]

LEIA: I’m not gonna hurt you.

[Leia looks around at the dense forest, and at the charred remains of her speeder bike, then sits down, with a sigh, on a fallen log.]

LEIA: Well, maybe you can help me. Come on, sit down.

[Leia removes her helmet and the Ewok runs about madly.]

[The Ewok takes Leia’s hat and tries to stick it up his bum.]

[The Ewok urinates in Leia’s helmet, smears mud down her face and calmly walks off.] 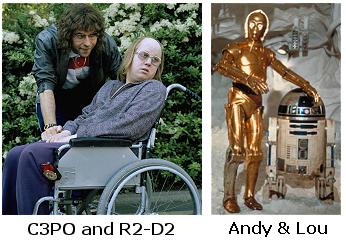 Another snippet of Little Empire, this one was written by me (with maybe some help from George Lucas, Matt Lucas and David Walliams):

TROOPER: How long have you had these droids?

LUKE: About three or four seasons.

BEN: They’re for sale if you want them.

TROOPER: Let me see your identification.

[Luke becomes very nervous as he fumbles to find his ID while Ben speaks to the Trooper in a very controlled voice.]

TROOPER: We don’t need to see his identification.

BEN: These are not the droids you’re looking for…

Yesterday, my good friend James Frost and I began rewriting portions of the classic sci-fi film Star Wars in a Little Britain style. Here’s an excerpt. James wrote this bit:

OWEN: What I really need is a droid that understands the binary language of moisture vaporators.

JAWA: Have we got any droids that are fluent in the binary language?

MARGARET: I think we do have one – it should be out the front there – a red and white, R5 droid.

JAWA: (looks to one side) Oh yes, here we go! An R5 droid that’s fluent in binary, and oh – how funny – his last job was on moisture vaporators!

OWEN: May I have a look?

OWEN: I was hoping for a robot with a slightly more domed head.

JAWA: Have we got any robots that are fluent in the binary language of moisture vaporators but that have a slightly more domed head than this R5 unit?

MARGARET: I think we do, yes – there’s an R2 unit down there!

JAWA: Oh yes, here we go – and he *does* have a more domed head than the other one.

OWEN: Did I mention that he should have dot matrix printer built into his face?

JAWA: I’m sorry, but this one doesn’t have a dot matrix printer built into his face.

OWEN: Oh… is there anywhere in the local area that specialises in droids with domed heads that are fluent in the binary language of moisture vaporators and have dot matrix printers built into their faces?

JAWA: I don’t think there are any in the local area, no.