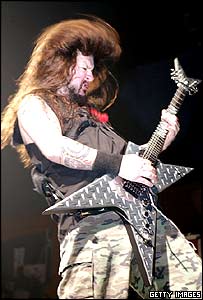 I still can hardly believe it: ‘Dimebag’ Darrell Abbott, the former guitarist with Pantera, and then Damageplan was murdered on Wednesday evening, shot dead at a Damageplan gig in the USA.

A gunman opened fire on a rock band and crowd during a concert at a nightclub in Columbus, Ohio, on Wednesday, killing five people and injuring two.

Among the dead was Darrell Abbott, guitarist with metal band Damageplan, formed from Grammy-nominated group Pantera, who had just begun their set.

Police said the man got on stage, shot Abbott several times at point-blank range and fired at other band members.

He then turned on the crowd before being shot dead by police.

FOR NO REASON!! Such a waste. Such a talent, and an amazing, amazing guitar player, who also endorsed Digitech guitar pedals (my favourite!). Why do they allow people to carry guns in the US?! Why?!!

My heart goes out to Vinnie Paul, his brother and drummer in the band, and to his friends and relatives.

The Damageplan site has a very simple tribute. The Anthrax site had a great tribute to him from Charlie and Scott, both still reeling from the news. As did the Metallica site, with a message from Lars. Dave Mustaine had a message on his Megadeth forum.