In many pubs and cinemas around town you can pick up free promo postcards for all sorts of things: films, alcohol, the armed services, clothing, etc.

Months and months ago I picked up a handfull of postcards at Bar 38 on George Street, including one from clothing manufacturer H&M.

This Christmas I doctored it and sent it out as a e-mail Christmas card. Although, first of all it had the Heineken logo on it … just goes to show how effective Carlsberg’s advertising is. Probably! 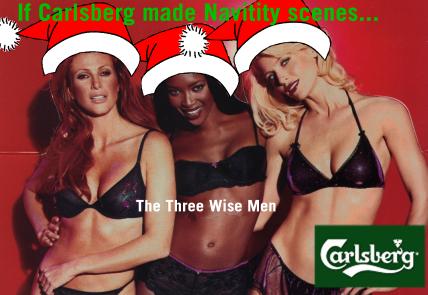 Professor Dick Henry at John Hopkins University in the US has proposed a new, revised calendar that would mean that every date falls on the same day of the week each year.

As well as a revision to the calendar, Prof Henry also wants to standardize time to GMT. This would mean that if it was 1pm in London then it would also be 1pm in San Francisco, regardless of whether it was in the middle of the night or not. You can see his point: “Phone me at 10pm” would mean the same thing no matter if the call was from Edinburgh to Selkirk, or Edinburgh to Sydney.

You can check out his Common-Civil-Calendar-and-Time (C&T) calendar at http://henry.pha.jhu.edu/ccct.calendar.html.

His plan is to get universal, world-wide approval of his ideas by 1 January 2006. I feel a Y2K+6 Bug coming on.

Comments are back on now. I’ve added a new anti-spam trap. This requires users to preview their comments before they are posted. Seemingly this trips-up a number of automated spam scripts. I can only try.

I know that the preview page looks nothing like the rest of the site, but I’ll change this soon. (Once Christmas is over, I’ll bet.)

For my birthday last month my brother- and sister-in-law, Paul and Pauline, gave me a Paint Your Own Mug kit. After I finished writing my sermon yesterday evening I decided to give it a go.

Hmm… what to put on it. Well, there really could only be one possible contender: Mozilla Firefox. So I had a go. I think I might have taken the whole open-source thing just that one step too far! 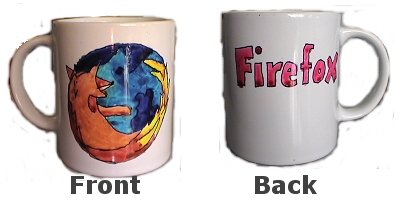 It is well and truly glazed. The instructions say to pop it into the oven for 20 minutes at gas mark 3. I made the mistake of popping off for a ‘quick’ game of Star Wars Battlefront. One campaign apiece on Hoth and Endor later and I leapt up in horror: “MY MUG!!!”

Next week I’m going to draw my own Firefox t-shirt!

Today, I rearranged my desk. That’s just how exciting today was!

Actually, I put up my old TV wall bracket. Twice.

We found the bracket in the garage in our house in Inverness, and since nobody had claimed it within six months — and it was too small to balance the car on in the garage — I kept it, screwed it to the wall and it safely held my 14″ TV above the filing cabinet in my study for a couple of years.

Needing a bit more surface space I decided to once again employ the particular skills of the AVF (that’s the make) TV bracket. I found it in the cupboard in the spare room. Held it against the wall, marked the holes, drill, bang in the rawlplugs, electric screwdriver, and job’s a good ‘un.

For about five minutes.

The whole thing… the WHOLE thing came off the wall, bounced off my filing cabinet and landed on my desk, rather like a weird, square, plastic Professor Yaffle stepping down from his lofty perch. Remarkably, the thing still works! Undeterred I banged-in larger, meaner-looking rawlplugs. The kind of rawlplugs that are probably banned in three star systems (and probably not even made my Rawl).

A couple of hours later and it’s still up there. Here’s hoping.